Decoding Chairs – A guide to where to place your Derriere! 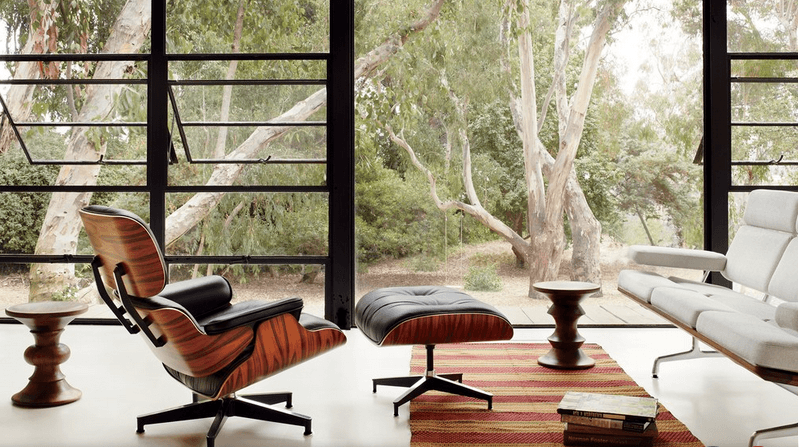 There as many chair designs out there as there are stars in the firmament it seems some days, and each has a fabulous and often unspellable name.

Here is a brief guide to decoding some of the particularly popular lovelies that we often see but may not know the name or story behind.

First created in Mexico in the 1950s the exact details of its design and designer are unknown. Rumor has it, a French tourist was lounging on a rooftop on a hot afternoon. He became unsatisfied with the sweltering heat and had an idea. He decided to make a chair using the stringed construction of traditional Mayan hammocks. From this, the Acapulco chair was born.

The unique design is easily recognizable and can now be seen on balconies and patio’s across the world. Acapulco chairs were originally made using steel and plastic. Bright colours are a trademark of this chair with modern replicas tweaking the design to include rocking varieties and a host of other deviations.

The Eames Lounge Chair and Ottoman

Created by Charles and Ray Eames in the 1950s (a good time for furniture design it appears!!) for the Herman Miller Furniture company. The Eames Lounge Chair and ottoman are made of molded plywood and leather. They are officially titled Eames Lounge (670) and Ottoman (671) and were released in 1956 after years of

development by designers. It was the first chair that the Eameses designed for a high-end market. Examples of these furnishings are part of the permanent collection of New York’s Museum of Modern Art. This luxury item was inspired by the traditional English Club Chair. Charles’s vision was for a chair with “the warm, receptive look of a well-used first baseman’s mitt.” The Eames Lounge Chair is an icon of Modern style design

Charles and Ray (short for Bernice Alexandra “Ray” Kaiser Eames )were an American design married couple who made significant historical contributions to the development of modern architecture and furniture. They also worked in the fields of industrial and graphic design, fine art, and film.

Such an interesting story behind this chair design!! The story of the Louis Ghost Chair, as it’s named, begins with Louis XVI. As in the king of France. During the reign of the 19-year-old monarch and his better half, Marie Antoinette, a renewed interest in classical Greek and Roman design developed, which manifested itself in all sorts of trendy architectural and interior design elements throughout the king’s reign. One such furnishing—a chair with a rectangular or round upholstered back, clean lines, column-like carved legs, and an exposed wood frame—had staying power, eventually earning the name of the monarch, becoming known as the Louis XVI Chair. This formal upholstered chair remains a timeless classic. Then along came a French designer named Philippe Starke (a school dropout known for his cheeky and subversive design)

It was only fitting that Starck would be daring enough to mess with royal style. In 2002 he reinvented the classic Louis XVI armchair for Italian design company Kartell,  The designer distilled the antique furniture piece down into one silhouette, translating its round, medallion-shaped backrest, curved arms, and straight legs into a single clear plastic chair. Calling upon not only the reign of Louis XVI but on ancient Greek geometry, the chair was a triumph of postmodern times. One of the greatest features of the Ghost Chair is how it’s made. The iconic chair required significant technical innovation: It’s made of a transparent injection-molded polycarbonate, which uses a single mold. This means that the entire chair is just one piece—no screws, upholstery, or separate arms and legs. Because it’s plastic, and because there are no joints (which could freeze or crack in the rain or cold), it does particularly well outdoors. So, it is an indoor/outdoor chair and has even become a popular child’s must-have item (with a few variations)

Designed by Arne Jacobsen in Denmark 1958 specifically for the SAS Royal Hotel in Copenhagen, along with many other pieces of furniture that have now found big lives of their own outside the hostelry. His clever pop interpretation of a traditional armchair is all curves and fluidity, soft and sexy. It also creates a sort of cozy cocoon of privacy, especially if you swivel it away from someone you want to ignore or mute. 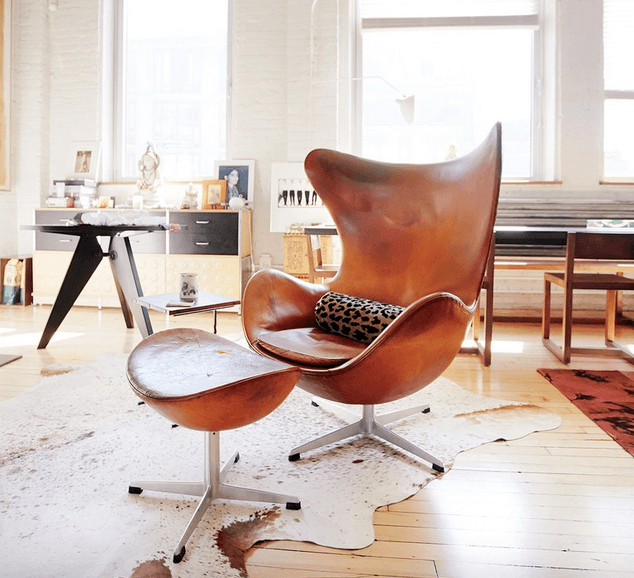 B32 Cesca and Wassily Chairs

Designed by Marcel Breuer in Germany in 1928 These two designs are important milestones in the history of modern furniture  Fascinated by bicycle handlebars, Breuer and Mart Stam used non-reinforced tubular steel to pretty much invent the 20th-century modern chair. Though the Wassily is more sculptural, more abstract, and complicated, the B32/Cesca was the real game-changer: It offered a comfortable bounce and seemed to float a human being on air. As if all that weren’t enough, Breuer also designed the former Whitney Museum in New York, now known in respect as the Met Breuer.

Designed by Eileen Gray in France in 1927 and based on the deck chairs of steamships, this piece gets its name from the abbreviation for “transatlantic.” The frame has complicated joinery with chromed brackets, while the seat is a sling with a pivoting head-support section.

In an era dominated by male designers, each one of Gray’s designs is exceptional and worthy of study and collecting; her Dragons armchair, designed circa 1917, once belonged to Yves Saint Laurent and Pierre Bergé and sold at auction in 2009 for a whopping $27.8 million. Still the most expensive chair ever sold in the world.

So if you’re feeling particularly flush this month – there she is. The Dragon Armchair!!

There are a million more I’d like to explore by important designers like Mies Van der Rohe, Le Corbusier, etc – another day.