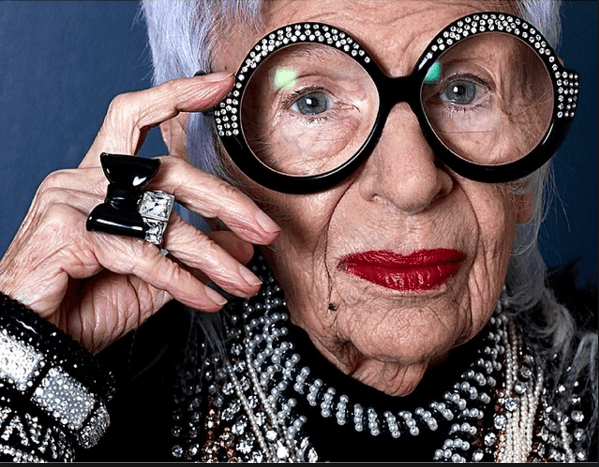 There is something about Grand Dames that is so fascinating. Ladies of a certain age who have conquered their field and who seem to get stronger and better with each passing year. Right up there with the cream of the crop is the extraordinary Iris Apfel!!

You may not be that familiar with the name but I’ll bet you have seen her image around. Her signature look of enormous framed glasses and brightly coloured and patterned clothing with heaps of disparate accessories on a tiny frame means that she is not easy to ignore. The Lady is well into her nineties and just getting better. Born in 1921 in America to a father whose family owned a glass and mirror business and a Russian born mother who owned a fashion boutique. Her mum was really ahead of her times – opening her own boutique during the years of the great depression and working long hours to make it work.From both her parents she learned a strong work ethic and a passion for fashion and interior design. Iris studied Art History and went on to work for Women’s Wear Daily and for interior designer Elinor Johnson.

in 1948 she married Carl Apfel and they were married till his death in 2015. The secret to their long and enduring marriage, Iris suggests, is a sense of humour. With an interior design business already established the couple began sourcing fabrics and vintage pieces from the Souks of North Africa to European flea markets for some of America’s most well to do homes.

Soon demand meant that the dwindling supplies of textile rarities could not serve projects for a growing clientele that came to include the likes of Estée Lauder and Greta Garbo. Then quite by chance Iris took a design of her own fabric that she wanted to have weaved to a fabric weaver. He loved the design and in 1950 Old World Weavers was born. The company was set up to  replicate the historic fabrics they found on their travels. They sourced the specialist looms and weavers needed to recreate them wherever in the world they were.

This business was run by the husband wife team till they retired in 1992 and became a leading luxury fabric company using old word methods to create the most extraordinary fabrics. The couple did work for the Met as well as very important work for the White house for 9 of its presidents including Truman, Eisenhower, Nixon, Kennedy, Johnson, Carter, Reagan, and Clinton.

Apfel still consults and lectures about style and other fashion topics at he University of Texas where she was made a professor and is busy with several other projects: her Mac cosmetics line, her work for Eye-Bobs and Yoox. in 2012 she launched her own line of handbags: Extinctions.

as with all great ladies – they have a lot to say about a lot of things. Here are some priceless Iris quotes:

“I’m a hopeless romantic. I buy things because I fall in love with them. I never buy anything just because it’s valuable. My husband used to say I look at a piece of fabric and listen to the threads. It tells me a story. It sings me a song. I have to get a physical reaction when I buy something. A coup de foudre – a bolt of lightning. It’s fun to get knocked out that way!”

“There is no road map to style. It about self expression and above all attitude.”

“I say dress to please yourself. Listen to our inner muse and take a chance. Wear something that says “Here I am today!”

“I see myself as the world’s oldest living teenager because I have such a good time and I try to get as much of a kick out of things as possible.”

House and Garden describe the indomitable Iris as ” the embodiment of a New York grande dame and her own finest project.”

“Fashion you can buy, but style you possess.” 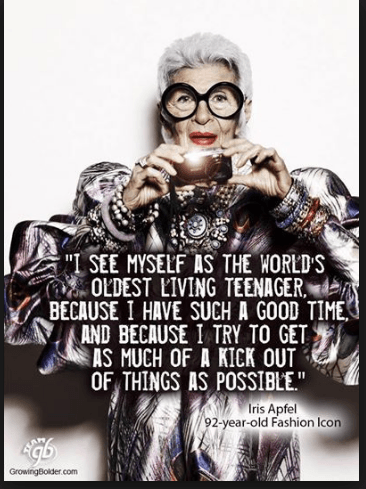 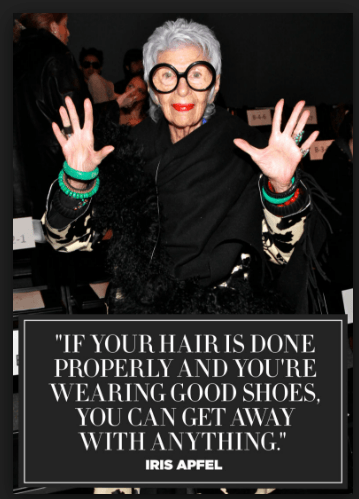 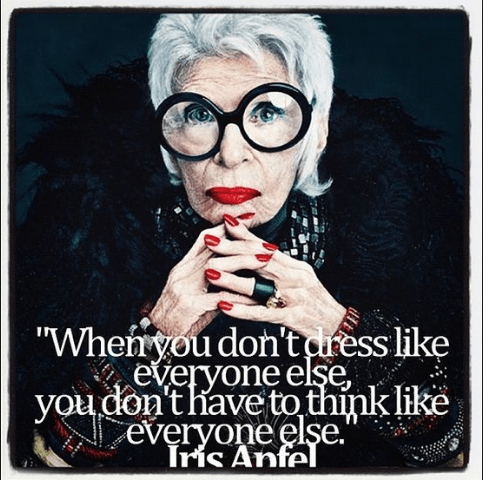 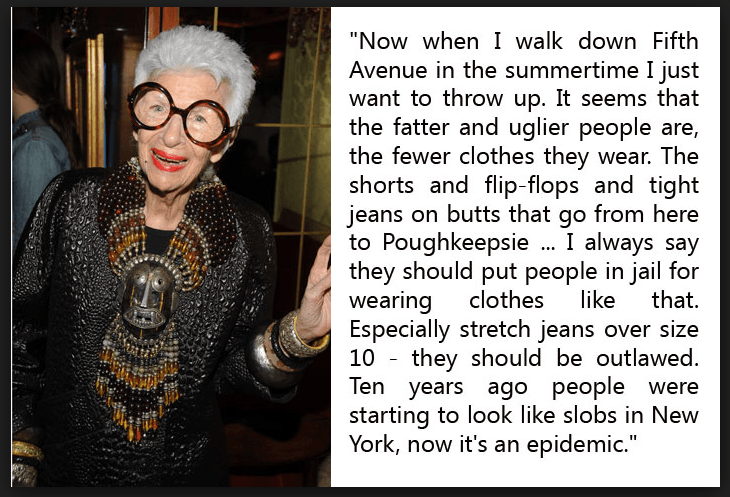 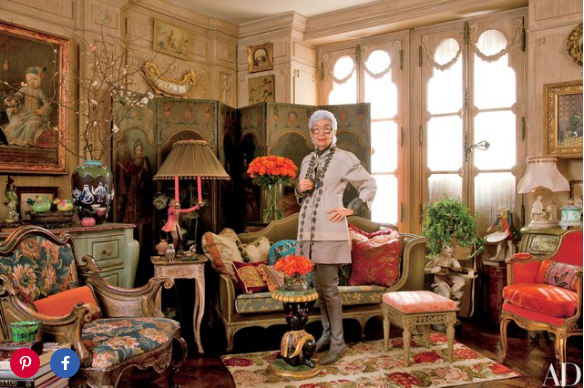